Nestled amongst the lush rolling hills of the Midlands, stands a Hilton home that is a showstopper. Blending the perfect balance of dramatic interiors, local flair and a very welcoming, homely atmosphere we could not resist meeting with the design visionary Cecile Thatcher, who brought her dream family home to life! Take the tour with Caesarstone… 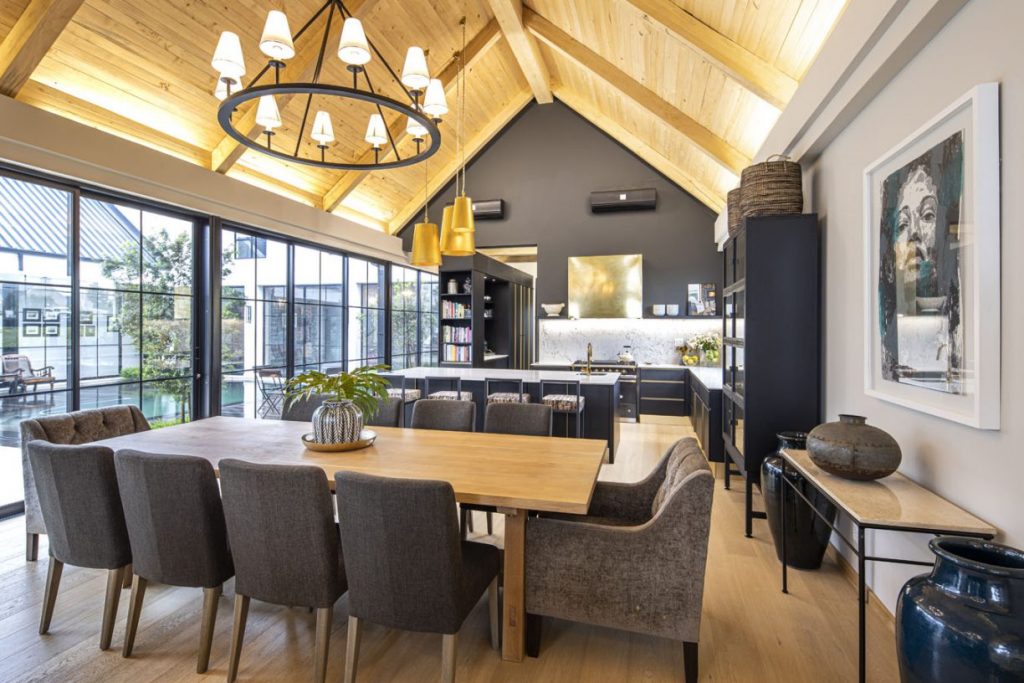 With three daughters and a large extended family, this home needed to host events and family gatherings. From Caesarstone’s White Attica in the kitchen, to the exposed poplar beams in the ceiling, the mix of finishes is remarkable and works well together. “We have three daughters aged 27, 23, and 16. Between the five of us we all enjoy socialising and entertaining our friends,” says Cecile. “Our previous home had a classic design with living rooms being separate. This time we wanted an open feel conducive to easy living and no one having to feel cut off from the rest of the family whilst cooking or braaing.” 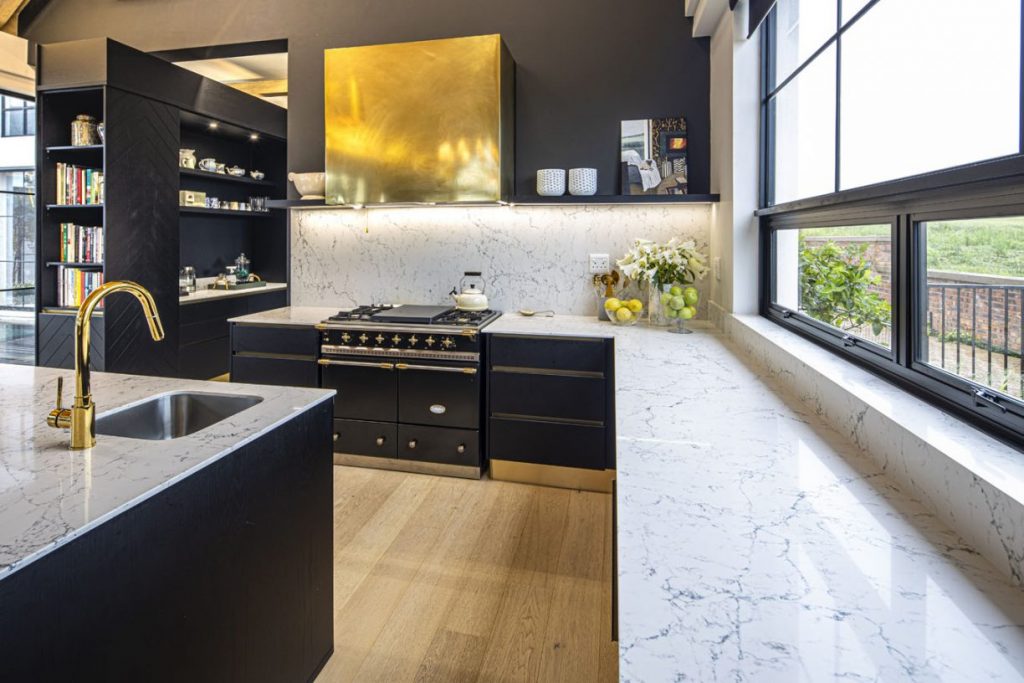 Their gorgeous Caesarstone kitchen was designed by The Kitchen Studio and installed by Afrigran.

With food and cooking a top priority and passion in the home, the space also needed to work together and literally open itself up to the pool, braai area, courtyard, and open-plan kitchen. Along with Cecile’s keen eye for interior design the result is a dramatic but warm and homely space that is oh, so on trend! From breaking ground to moving in, the renovation took a whole year to complete. Every single detail was carefully thought through, and it shows.

Local artworks adorn the walls and interesting décor items catch your eye. Built with entertaining in mind and featuring Caesarstone’s dramatic Vanilla Noir, luxury velvet bar stools, and a marble wall cladding, the bar area is a showstopper where guests can spill out onto the lawn to enjoy breathtaking views of the rolling hills of the Natal Midlands. 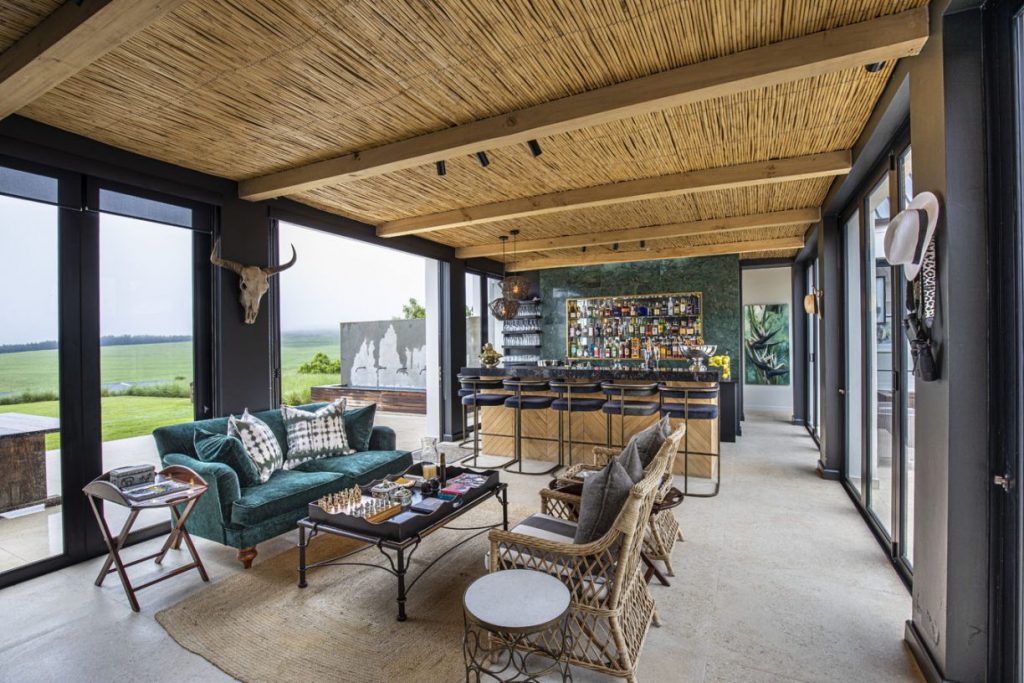 Lisa Rorich was the architect responsible for the project and worked very closely with the Thatcher’s to ensure their vision became a reality. “We approached Lisa, because we wanted an edgier look than what we’d had in our previous home,” remarks Cecile. “Having seen her work, we felt that she would understand the contemporary accents that we wanted to include in the design. Lisa was fantastic, she loved our ideas, ran with them, and introduced other complementary design elements which took our ideas to a new level.” 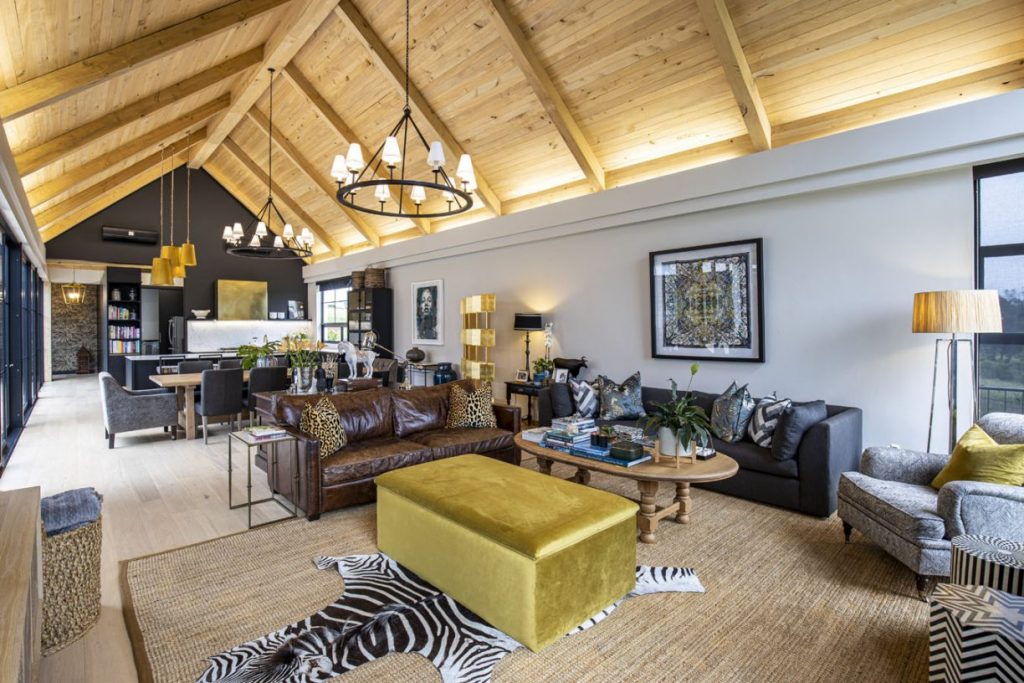 Dramatic, warm, and homely, House Thatcher is everything the Thatcher family hoped for and more. The interior details of the home are truly incredible – from the bespoke wallpaper to the refurbished Ardmore love seat. Every detail has been carefully curated to a specific design aesthetic. When asked for her inspiration, Cecile remarked: “I love so many different styles of décor, so it’s difficult to narrow my style down to an exact description. However, my main objective was to create a warm and welcoming space with a touch a glamour and drama.” 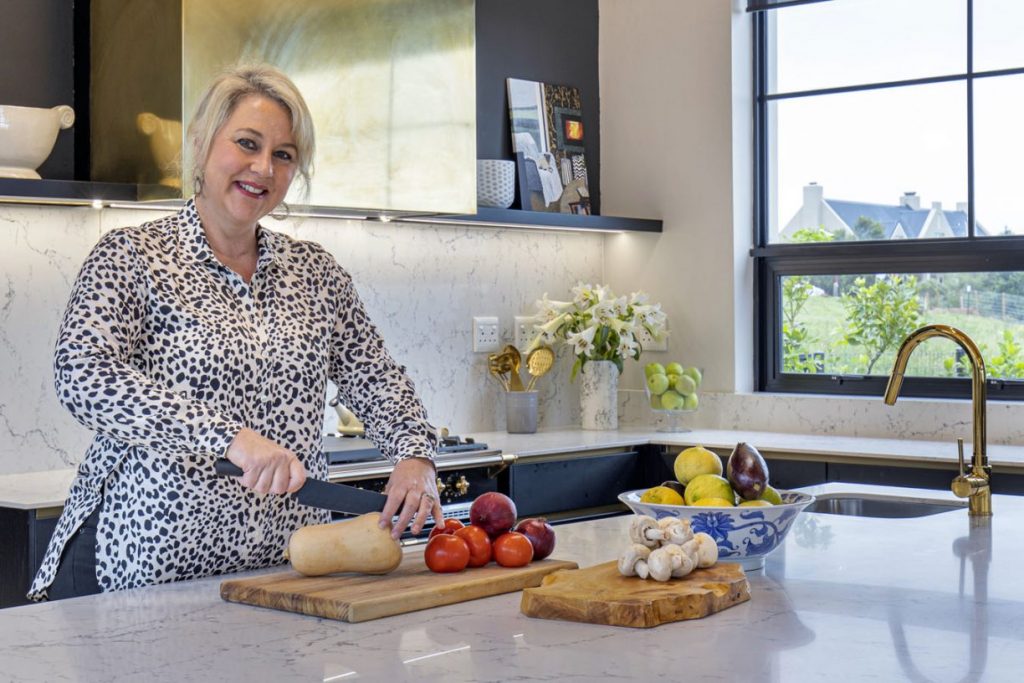 One feature in the house that is particularly impressive is the exposed poplar beam ceilings, which were collected from their raw and natural state before being installed. The off cuts were even used to clad the wine cellar! “The poplar was a labour of love. We wanted to introduce a more ‘modern’ take on the poplar ceilings used in Cape farmhouses,” says Cecile, “We’d had a quotation from a sawmill in the Eastern Cape to supply the poplar for the build.”

However, being on a strict budget, the cost of the timber and the transport getting it to site in KZN proved prohibitive. We therefore had to make another plan. My husband contacted a farmer in the Midlands who had poplar trees ready for felling. We watched their progress from being felled and sawn into planks in the field, to having a friend of ours who owns a sawmill drying them out for us in his kiln, to being cut and planed into the final product. This entire process took over six months.” 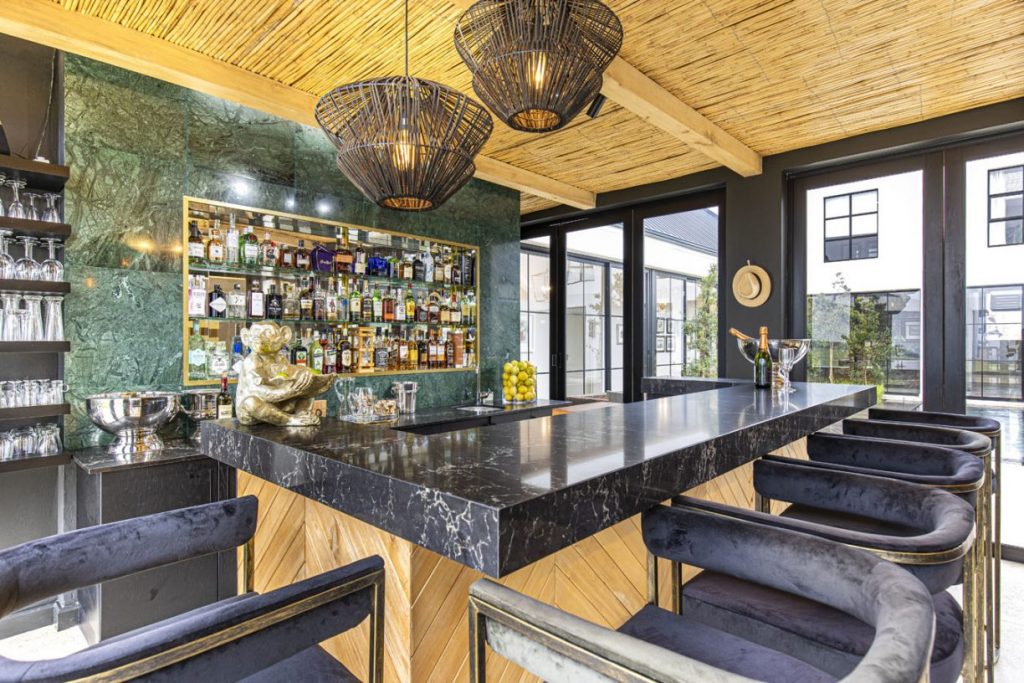 Apart from the love of cooking and entertaining, a love of local art is certainly apparent with works by Lieze Meyer and Sarah Kelly featured throughout the home. “We are very fortunate to have some very talented artists in our community and I believe in supporting local,” says Mrs. Thatcher. Having previously worked with Lieze, the Thatchers knew that including her work in the overall décor was a good idea: “I absolutely adore Lieze’s work. She has done some pieces for me previously, so for my birthday my husband commissioned her to paint a bold botanical which would complement the bar area.” When speaking about Sarah’s work, she only had the best things to say: “Sarah’s work is a lovely accent in our daughter’s room, which has a feature wall covered in a wallpaper that I designed.” 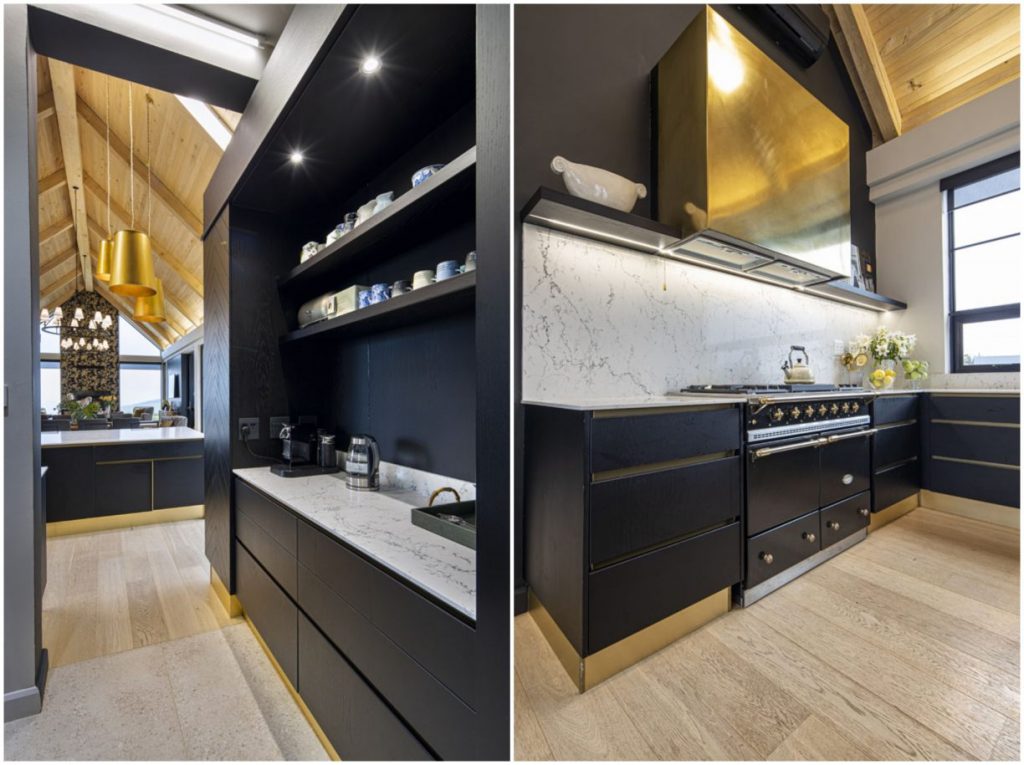 LIKED THIS? THEN YOU WILL LOVE: